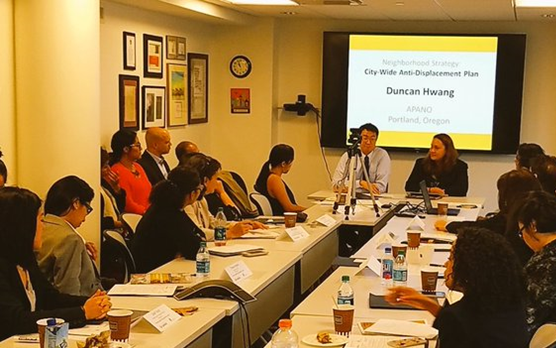 On May 11, 2016, the National CAPACD and the Council for Native Hawaiian Advancement (CNHA), released a report titled “Our Neighborhoods: Asian American and Pacific Islander Anti-
Displacement Strategies”. PCDC’s Sarah Yeung spoke at the launch event on behalf of Philadelphia Chinatown about the early impacts of gentrification.

Yeung noted that Philadelphia Chinatown continues to offer unique opportunities for success for Limited English Proficient immigrants, but this haven is currently threatened by issues of affordability. Many historic Asian American neighborhoods, including Philadelphia Chinatown, are located in high-cost cities, in or near downtowns with rising rents and land values. Although the change in Philadelphia has been more gradual compared to other cities, Yeung stated: “The real damage of gentrification in immigrant neighborhoods does not start when a community is already facing a crisis of displacement. It starts when a community begins to see its identity transform, from a place of opportunity to a closed door for new residents.”
The report summarizes 24 strategies that have been effective in protecting Asian American and Pacific Islander neighborhoods in the face of gentrification, keeping them affordable. Philadelphia Chinatown is featured in the report as an example of the effectiveness of Registered Community Organizations (RCOs).

Specifically, the report emphasized the effectiveness of PCDC’s dedicated review of zoning variance applications, and their efforts to ensure that residents, property owners, and businesses in the area are informed and actively involved in Chinatown land use decisions.

The report, the launch webinar, and press coverage can be found here:
http://www.nationalcapacd.org/our-neighborhoods-asian-american-pacific-islander-anti-displacement-strategies