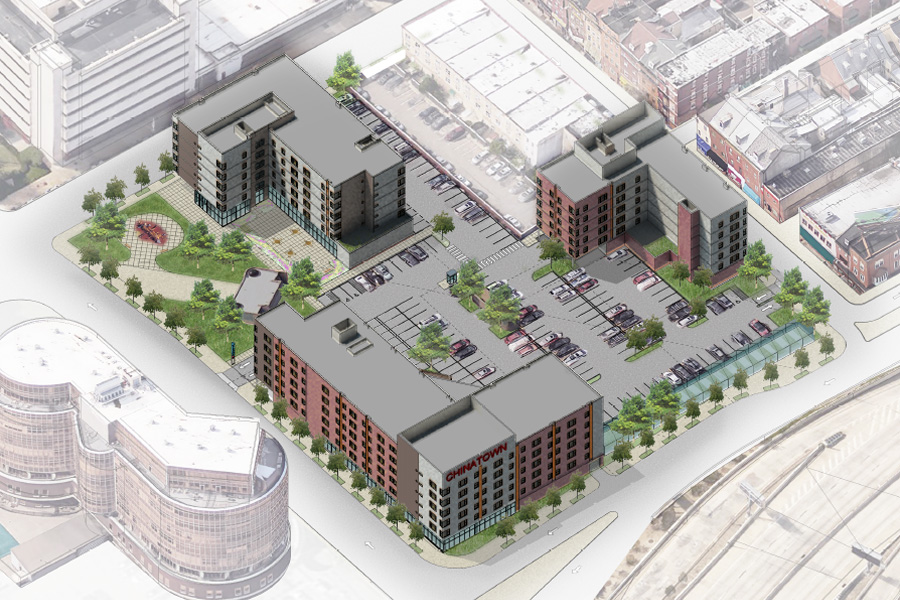 On March 6th, the Philadelphia Redevelopment Authority and Councilman Mark Squilla hosted a Public Meeting to decide the fate of a parcel of land at 8th and Vine Streets.

The proposed buildings are 6 stories, matching the height of other Chinatown buildings to limit traffic congestion in this busy neighborhood. “Another Village” will also feature an iconic Chinatown sign, a gateway into Chinatown from the east.

“Another Village” faces a competing proposal to construct a 14-floor nonprofit legal services office building, an 8-floor Comfort Inn, “55-65” affordable senior housing units, luxury tower, 20,000 square feet of retail, and a 180 space parking lot. This ambitious project will change the character of Chinatown by watering down its cultural identity and lead Chinatown down the same path as Washington D.C.’s Chinatown.

At 3 acres, the land in question is Chinatown’s last major undeveloped parcel and its fate will speak to generations of place-based struggle in Chinatown.

PCDC believes “Another Village” is the best proposal for Chinatown. PCDC and Presby’s Inspired Life are nonprofits that have brought decades of benefit to Chinatown. Presby manages Chinatown’s On Lok House. Parkway meanwhile developed Chinatown’s Pearl Condos, creating the iconic dragon gates, and successfully connecting housing and retail opportunities to Chinatown residents; the majority of condo owners and small businesses in the Pearl are from the community. The other team does not have the same track record of
building for the community. To date, PCDC has developed 320 housing units, the majority of all affordable housing in Chinatown; its most recent development was the 810 Arch Street Francis House of Peace in 2016 with Project HOME. PCDC believes the best proposal is the one that returns Chinatown land to Chinatown.

Before the urban renewal projects of the 60s and 70s, the land belonged to Chinatown businesses and residents. The 8th and Vine parcel was one of many in Chinatown seized under the right of eminent domain for projects such as Independence Mall IV, the Vine Street Expressway, and the Gallery I and II. Residents and small businesses were evicted, and properties were razed, turning the once vibrant area into a surface-level parking lot for over 50 years.

The forced evictions roused a backlash of grassroots activism known as the “Save Chinatown” movement in the 1970s. Activists negotiated compromise on many of the projects, but despite these efforts, Chinatown lost 25% of its original land area. Since PCDC’s activism 51 years ago, Chinatown has since protested and halted the development of a federal detention center in 1994, a baseball stadium in 2000, and a casino in 2008.

This struggle is not unique to Philadelphia’s Chinatown. Chinatowns throughout the country are at risk of losing their communities due to development pressures. In January 2017, in Boston alone, developers proposed three new hotels for the Chinatown neighborhood. These proposals came as a harsh blow to residents who have watched their neighborhood fall under the shadows of luxury housing and hotels, despite the reality of a housing crisis in the area. Residents are now counting on a series of tenant protections to bar landlords from clearing entire buildings and protect renters who are threatened with eviction and the fear of displacement.

Other cities like San Francisco and New York City are facing similar threats, with many worrying that their respective Chinatowns will soon be unrecognizable. In New York City, Chinatown employees and residents are watching local restaurants quickly disappear thanks to new hotels, banks, and trendy eateries.

PCDC will not allow Philadelphia’s Chinatown to be subject to the same reality. The “Another Village”, the project rectifies historical injustice by reclaiming Chinatown’s land for the community.

The final date to submit feedback to the Philadelphia Redevelopment Authority (PRA) was March 17th.

PCDC is currently awaiting the PRA’s the decision.