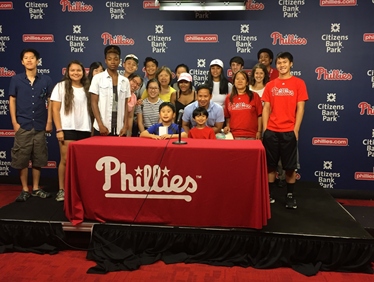 “Anyone can find a career in baseball” was one of the unexpected takeaways from Chinatown’s recent community visit to Citizens Bank Park. In an event hosted by the Phillies and organized by PCDC, the Chinatown community was invited to take a tour of Citizens Bank Park and watch batting practice. We ended the day watching the Phillies vs Mets game. As someone who isn’t particularly thrilled by baseball games, I was even more hesitant about this tour. I was expecting a heavy focus on baseball stats, history and players. However, the tour proved otherwise, giving those who attended, 21 individuals from the ages of 9 to 60, a very exciting and informative “behind the scenes” tour of the Phillies.

The first thing we did during the “behind the scenes” tour was to listen to stories and advice from various individuals who work for the Phillies: Kenny Johnson (Coordinator, Outreach), Jon Joaquin (Director Youth Baseball Development), Mike Talley (Landscaper & Site Work Operations), and Mark DiNardo and his team (Director Broadcasting & Video) who handles all media Production for the Phillies. Their main message was that all organizations have many different components critical for success, so they are in need of all kinds of talents. In the case of baseball and other sports, the MVP’s of the organization aren’t only the visible athletes on the field. After hearing various individuals who work for the Phillies and also asking them our own questions, we received a tour of the inside area of the stadium. Many would agree that the most exciting room was definitely the media control room where everything from stadium music, the fan cam, and scoreboard are controlled.

While mostly aimed at youth, the “behind the scenes” tour also inspired many of the older chaporones As one adult joked during a question session, “Now I want to change my job to baseball!” The charisma and enthusiasm from those who spoke to us was inspiring and their stories about the importance of gaining experience, doing what you like, and working hard to find your dream job were good advice for all ages.

After the exciting tour and just as the day began cooling down, our group settled into our stadium seats and spent a relaxing and enjoyable evening together watching baseball, eating hot dogs and cheering on the Phillies (even though we also found some Mets fans amongst us). Many look forward to the next time they can attend a similar community outing. If you would like to take part in similar fun, free events, stay tuned to the PCDC newsletter, our Facebook page at https://www.facebook.com/phillychinatown/, and PCDC in the Chinatown neighborhood.