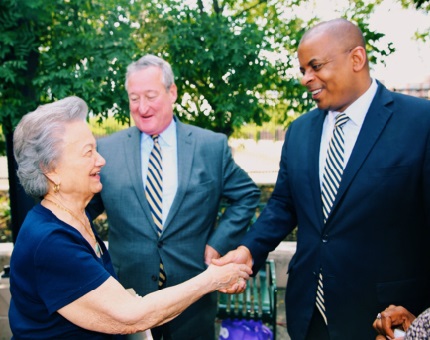 The story of our infrastructure has not always been one of connecting,” said U.S. Secretary of Transportation Anthony Foxx at a press conference held over the Vine Street Expressway on Monday, June 27th. Philadelphia Chinatown knows this to be true. The construction of the six-lane Vine Street Expressway initially threatened to destroy the heart of the Chinatown community and cuts Chinatown North from development opportunities, resulting in persistent blight. Explained Mayor Kenney: “Its [Vine Street Expressway] construction managed to split three communities: Chinatown and its 8000 residents, Callowhill District, and the Drexel School of Medicine Hahnemann University Hospital Campus. The expressway has a troubling impact. Every school day we have hundreds of K-8 schoolchildren crossing Vine Street to get to Holy Redeemer Chinese Catholic School and the FACTS Charter school.”

PCDC has long championed lessening the Expressway barrier to promote development into Callowhill/ Chinatown North. The Expressway contributed to the loss of 25% of the land that was once considered Chinatown. The Office of the Mayor with the assistance of PCDC submitted a proposal to Secretary Foxx’s “Every Place Counts” challenge, which was created to “raise awareness and identify innovative community design solutions that bridge the infrastructure divide and reconnect people to opportunity.” Secretary Foxx has long worked to reduce the effects of infrastructure on economically and racially marginalized communities.

PCDC staff was thus excited to hear that Secretary Foxx would be coming to Philadelphia to make an announcement. At the press conference, Secretary Foxx revealed that Philadelphia was one of four winners of the “Every Place Counts” challenge. Other official speakers included Mayor Kenney, Managing Director of Philadelphia, Michael DiBerardinis, and Councilman Squilla.

Winning this proposal gives the Philadelphia Community Team the opportunity to participate in a design session hosted by the USDOT from July 14-15. This workshop will combine the voices of elected officials, urban planners, designers, and members of the affected communities to begin drafting projects that will finally rectify the damage of the Vine Street Expressway.

Having the deficits of the Vine Street Expressway acknowledged on a national level, and the subsequent push to action is a very promising development. However, Secretary reminded everyone that “The hard work is, frankly, ahead of us.” John Chin, PCDC Executive Director echoed that sentiment, “Today is not a victory by any means, but it is a beginning for many possibilities.”