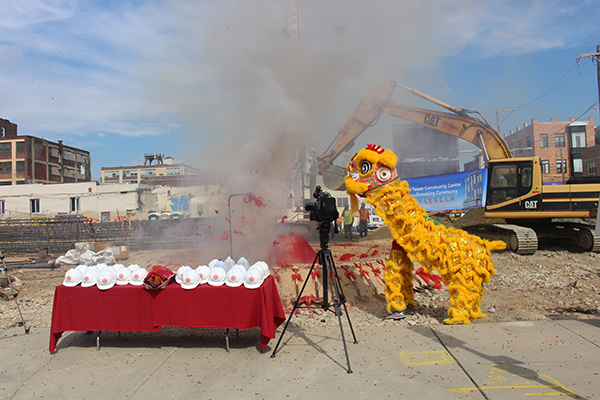 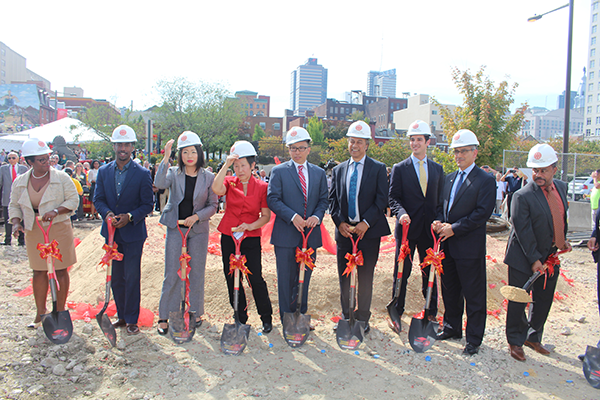 On Friday, October 6, 2017 the Philadelphia Chinatown Development Corporation (PCDC) joined by State Representative Michael O’Brien, Councilman Mark Squilla, representatives from the offices of Pennsylvania Governor Tom Wolf and U.S. Senator Robert P. Casey, and more than two hundred guests celebrated the historic groundbreaking of the Eastern Tower Community Center. The $75 million dollar project, co-developed by the PCDC and JNA Capital, Inc. and represented by a legal team led by Art Momjian of Duane Morris will be the largest in scope and budget to be built in Chinatown.

The groundbreaking was over 16 years in the making. State Representative Michael O’Brien, who was first presented with what was at that time a tiny project on the back of a napkin at a Chinese New Year banquet said, “Yeah, we could do that.” The project transformed into a mixed-use project that would have the density and scale to reconnect Chinatown over the Vine Street Expressway. “There was a lot of adversity along the way. This community never gave up,” said Representative O’Brien.

The Eastern Tower Community Center will be built over the next 26 months by Hunter Roberts Construction Group at 10th and Vine Streets in Chinatown. The 195,000 square foot building is programmed to include a 17,000 square foot community center with a state-of-the-art basketball court and multi-purpose gym, 30,000 square feet of retail/commercial space, and 150 modern housing units with spectacular City and Delaware River skyline views.  Rising at 10th and Vine Streets, the project will bookend the 10th Street commercial corridor that begins with the China Friendship Gate at 10th and Arch Streets.  Its iconic architectural features are designed to unite Chinatown across the Vine Street Expressway, which bisected the community in the 1990s.

The project is designed to address the recreation, housing and services needs of a growing community of both residents and Asian immigrants from the Philadelphia region. Chinatown is a historically low-income, immigrant community. As the Asian population has increased rapidly in the city, Chinatown has also evolved as a hub for many new immigrants who consider the community as a cultural touchstone and a center of retail, services and anchor institutions. Leases have already been executed for two commercial tenants: Chinatown Learning Center, a bilingual, Keystone STAR 4 preschool and pre-kindergarten program which will add slots in the new space, and a new restaurant concept from a small business owner.

PCDC and JNA Capital, Inc. assembled a creative capital structure that includes: $9 million in New Markets Tax Credit (NMTC) from the Commonwealth Cornerstone Group (CCG); $15 million in private equity from Goldman Sachs Urban Investment Group and a private equity group that includes PCDC, an affiliate of JNA Capital, Inc., and 5-Stone Green Capital; a $3.9 million bridge loan and a $2.9 million NMTC equity also from Goldman Sachs; senior debt of $41.7 million from Citizens Bank of Pennsylvania and Parke Bank as co-lenders; $4.5 million in international investment through the Global City Regional Center, LLC (GCRC), which is a Philadelphia based EB5 Regional Center that focuses on urban mixed-use economic development projects; philanthropic/government support and community donations that include $5 million in Redevelopment Assistance Capital Program (RACP) grant from the Commonwealth of Pennsylvania; and $1 million from the City of Philadelphia Commerce Department. The Asian Bank located in Chinatown and Beech Capital Venture Corporation, a local CDFI played a critical role as bridge lenders.

The festivities were conducted respectful of Chinese traditions on an auspicious day on the Chinese calendar with Chinese Lion Dancing, firecrackers, roasted pig, and lucky colors of red and gold. “I look forward to working with our great friends and civic leaders here today to do the next project,” concluded Representative O’Brien.