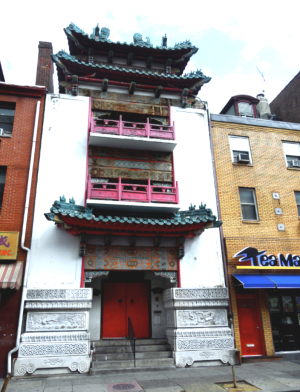 Standing unused for almost a decade, the Chinese Cultural Center was approved for conservatorship under Scioli Turco, Inc. in May 2016. The Pennsylvania Conservatorship Law, Act 135 grants temporary ownership of disused buildings to conservators, allowing them to remove immediate safety hazards. To ensure that renovation and eventual marketing respects the Center’s history and Chinatown’s community goals, PCDC filed a “Petition to Intervene,” which was approved in early August.

The Chinese Cultural Center building was constructed in the 1830s. In past decades, the Center was a distinct landmark in Chinatown. Originally established as a YMCA in 1955 by T. T. Chang, the Center became a hub of cultural exchange, hosting English and Chinese classes, and an annual Chinese New Year banquet. The Center fell into disuse after Chang’s death, and it stands out in its abandonment on an otherwise bustling commercial corridor.

Its idiosyncratic façade, crafted in Taiwan and installed in the 1970s, had crumbled, accumulating unresolved safety issues. On June 14, 2013, the Philadelphia Historical Commission voted to list the Center in the Philadelphia Register of Historic Places to protect its façade. Scioli Turco’s decision to take on renovation of the façade has begun the process of putting the Center back on the market and into use.

However, not all prior renovation has taken the Center’s historical and cultural significance into consideration. The Center’s interior was destroyed and gutted during the process of converting it into a restaurant, a project that was later abandoned. On September 22nd, the Court of Common Pleas expects to approve a plan to market the Center. As an approved intervener, PCDC will receive all details of renovation and will provide counsel on future marketing decisions, to ensure that the Chinese Cultural Center will remain a haven for the Chinatown community.